The Myth of Big Data (the myth that big data are now our primary route to knowing the social) is oriented to the social world in a particular way. It does not have as its domain a national population, or even the particular collectivities that might gather online. It builds its population, data-bit by data-bit, through a series of operations that bypass earlier ideas of social interrelations. 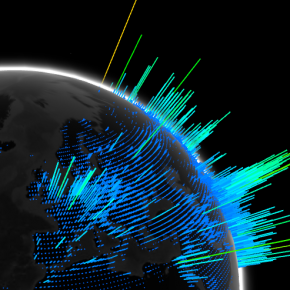 Its new form of ‘social knowledge’ splits up discourse populations: the groups that could once be talked about as populations for various purposes. It fractures the space of discourse, depicting its data subjects in ways that don’t connect any more with the space of action and thought in which actual individuals think they live; and it stretches the time of discourse, aggregating action-fragments from any moment in the stream of a person’s recorded acts into patterns that bear little relationship to how those people themselves understand the sequence and meaning of their actions.

Combine all this and mystify it through the Myth of Big Data – and you risk replacing older ways of talking about the social world that can still be related to social actors with myriad data-strings that lack any elements that connect with how individuals, with recognisable sets of human aims and capabilities, make sense of what they do. And so, since hermeneutics is the basis of social life, in installing the Myth of Big Data into our working practices for generating and attributing knowledge, we risk unravelling the social itself, or at least the languages of social description on which not just sociology, but also our practices of justice and politics, have relied.

We risk building a social landscape peopled by what the 19th century Russian novelist Nikolai Gogol called ‘dead souls’: human entities that have financial value (in his novel, if you remember, as mortgageable assets; in our new world, as unwitting data producers), but that are not alive, not at least in the sense we know human beings to be alive.

And this matters not just to those, like me, with a vested interest in certain ways of talking about the social. It matters to all citizens – to all those who would be citizens – that corporate interests and increasingly the state too aspires to know us through big data. As John Lanchester put it in a fine article in The Guardian in October, the surveillance capacities of the American and British states operate increasingly on the principle that ‘all they need is everything’*.

It would be a mistake to see the problem here as simply ‘the big, bad state’. My point is that the Myth of Big Data has already rationalized a state of affairs where a network of data-gathering and data-amalgamating institutions has, or aspires to have, everything (what Acxiom calls ‘big marketing data’). As governments and corporations increasingly prioritise access to ‘big data’ in their visions of how they will govern or profit (or both), we are only a step away from the fact, not the myth, of continuous surveillance from all directions as the new basis of how societies and the world are ordered.

This is an excerpt from a public lecture delivered at the London School of Economics, available for viewing online, titled “A Necessary Disenchantment: Myth, agency and injustice in the digital age.”

* the quote ‘all they want is everything’ was the headline of the print version of the Guardian article, though it does not appear in the online version linked to above.